It surely is not appropriate to find fault in others, or to assign blame to others for faults or wrong-doings that are apparently noticed in and around all of us.
And even, when looking closely and carefully, even if it seems appropriate, fault-finding is nevertheless not in any way effective and fruitful... except maybe in the attempt to deflect.
But then, we may wonder, is it more appropriate and effective to find fault in or to blame oneself?
Is it more effective to look for and find reasons for self-accusation and self-incrimination?
In fact, again looking closely and carefully, we will discover that even in self-incrimination there is deflection, albeit a reverse kind of deflection: the kind of deflection that victimizers invariably have their victims do: shifting blame away from the victimizer onto themselves!
Come to think of it, it might be good to remember when, how and by whom we were first made to feel wanting, inadequate or falling short, when we became so negatively self-reflective and consequently self-conscious.
It would be good to find out how we ever since began to feel so uncomfortably self-conscious.
Can you remember how, when and by whom you were urged to examine your conscience, how and why you got into fault-finding, self-accusation and self-incrimination? 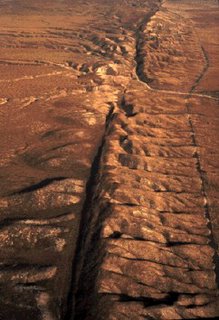 Isn't it so that even when we "very religiously" practice such self-examination and honestly inspect ourselves, when we look for personal defects and dysfunction, that no lasting freedom or peaceful and steadfast satisfaction ensues? Oh yes, we are promised that it will, but does it happen? Does it actually? Actually… it does not! Now this may not be an acceptable notion for some. This may not be a statement that if you adopt it, that others will compliment you for it. It may not make you popular in other people's eyes..
Ah, that darn fault-finding!
Could it be that the problem with fault-finding is so serious because of its compulsiveness, compulsive because we were externally compelled, driven, tricked and pressured into it by the momentum of moral history as well as history's peer pressure still pushing it, even promulgating it?

It may very well be that fault-finding by itself prevents or disables us to love our neighbors, simply because... simply because we cannot find reasons to love ourselves...
How can one love others when one constantly finds oneself at fault?Could it be that the compulsion to self-incriminate stands in the way of both: loving your neighbor and loving yourself? Of course it does! The sentence to "find fault" is precisely the sentence (possibly a life sentence) that stands in the way of the simple love that would be discovered and shared if that sentence simply were not there.

Aren't those "fault-finding sentences" like gates that are placed in our paths, the paths that run through the open spaces of our lives? The gates seem there, they even appear more real than fata morganas. 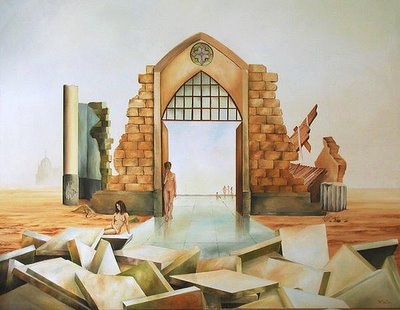 Even if the gates seem open,
access through them is clearly taboo,
and if apparently closed and keys seem to be needed,
we definitely do not have them,
nor do we seem to deserve having them.
That is of course…
if we need any keys at all!
As actually,
it is possible to navigate through life
as though there were no gates,
as... factually there are no gates whatsoever

But doesn't it seem more complicated than that? It might well seem so. The fault-finding-life-sentences include, in addition to their lock-and-keys, also the chains that link the sentences to all of our own and other people's actions – whatever kind of actions they may be. In addition, the life sentences comes with blindfolds, or, if not blindfolds then surely blinkers that make it hard to see the freeways through the open spaces of life...
no keys
no gates
no gates to love
no keys to love
love is discovered to simply be where one is
what one is
that one is always already simply present

And if one doesn't happen to see this, it is not even one's fault... nor anybody's! It's just those insidious, inherited, unreasonably passed-down, illuding sentences to look for shortcomings, to find defect and dysfunction, to somehow find oneself and others wanting, to find fault first before one looks for love,to find oneself and others short... the illusion to be missing something, to be indebted, to be "without.(1)"
If it is so that we are to love our neighbor as much as we love ourselves, and thus not find fault with or blame our neighbor(2) for anything, how do we love ourselves if we all too often can't even do that, being so pressed and pressured looking for and finding fault and blame in ourselves?
If, as it is said, that God loves us unconditionally, that divine love is so passionate and compassionate, why calling God a liar by finding reasons for us not to be lovable, not allowing ourselves to love ourselves with the same unconditionality, compassion and passion?
See the viciousness of the vicious circle?
What is it then what keeps that vicious circle going?
Could it be that we keep being coerced or pushed into identifying ourselves with that what we have been identified as for too long, so unreasonably, unfairly and unfounded... not being good enough? Haven't we been – too long and too often – identified as that what we are not, something we have never ever really been?Have we not been disabled too often, not being allowed to unconditionally identify ourselves aswhat we are… love without conditions in any condition?


Here's to love,
the unconditionality of human/divine love
in any condition.

Notes:
(1) The Latin word for "without" is sine as in sine qua non, a word very close to that other word: "sin"… as in inherited or original sin. In Sanskrit, SIN means not being (N) what one actually is (SI)! The Latin word for shortcomings or trespasses is debita or debts.
(2) Catholics or ex-Catholics can probably relate well to the following. Consider confession: after one lists one's assumed sins and trespasses (debita), after one gets absolved and the pastor says, "Go in peace and sin no more!", after one has done one's penitential prayers and/or penance, even after such confession, penance and absolution one really does not leave the booth or church in everlasting and unconditional peace! Almost immediately one finds oneself led back to conflict again, ready for another round of confession/absolution of which confession and absolution were never really absolute and surely not everlasting...