Is it all in the mind?

Cliff: Hey Wim, you occasionally use the term 'notion'. I have a question about that word. By 'notion', do you mean an idea, as in a purely abstract concept, or do you mean a feeling, as in a vague impression?

Wim: In principle a notion points to mental intake that is simply 'noted' or 'taken in'. It tends to have a feeling of simple unquestionability. A notion points to 'something that one just simply came to cognize or note. (See the definition above, especially the Latin 'noscere'). The contents (or the object) of one or more notions - when looked deeper often lead to conceptualization and thus... concepts and those concepts might then become questionable.Notions actually occur prior to conceptualization... hence 'prolepsis' (see above) from 'pro' and 'lemma' (premise). A simple notion can lead to a simple premise (or lemma) and is usually used as such in conceptualization and logic. When multiple notions are used as starting-off points (lemmas) for conceptualization they can often lead to dilemmas or trilemmas especially when the notions appear (seem) to be conflicting.

Cliff: My point is Wim, what are "notions" composed of? Not simply the idea itself, but from where does the position of the idea come from?

Wim: You are using the word 'idea' in relation to 'notion' and that is actually very 'right on' as notions are not ideas in the mental thinking sense but ideas ('eidos' - Greek) in the viewing/seeing sense... which is demonstrated by the fact that the word 'idea' is based on the Greek 'eidos' which derives from the Aryan/Sanskrit root WID which translates as 'to see', to 'observe'... ... ergo 'cognizing'. The words cognition and notion both come from the Latin 'nosco' - coming to know. (WID incidentally is also the root for words like 'video' and 'vision' and even... 'idol.)

Cliff: OK, thanks. But Wim, what I notice with notions is that many notions are easily shown to be inaccurate.

Wim: That is possible, but that inaccuracy happens when original simple notions get compromised by a mind that... (let's not look for the reasons why at this point, although that is tempting)... attempts to change the notions - the simply observed perceptions - to make them fit judge-mental or mind based ideas, not senses based ideas. ("You shouldn't have seen it.", "What you saw should be interpreted different from what you thought you saw.")
When they get 'mentally treated', simple notions get mixed in with assumptions and concepts and indeed can easily turn inaccurate... At that point the word 'notion' is actually not applicable anymore, at least not in its proper and original sense.

Cliff: Taking that into account, yet, people act from them as though they were completely accurate. How is it that this happens, specifically what underlying reasonings support the position within any particular mind?

Wim: OK, we should get into the 'reasons why' then.
Observations and perceptions (the contents of notions) are apparently (seemingly) altered (interpreted or reinterpreted) for reasons that come from ulterior motivations, having to do with manipulative maneuverings caused by abuse of power aimed at dis-enfranchisement - the seeming loss of freedom. ('Moksha' in Sanskrit)

But to get back to the meaning of 'notion', as you might know I always start from original meanings of words, using etymology to get there. Surely the word 'notions' over time took on confusing con-notations... (Note 'CON-notations'... that is meanings in addition to 'con', the original meaning). So originally 'notions' were just simply noted observations, sensed data, observations without prejudice so to say.

Cliff: Yeah, that conflict that there can be between judgments, thoughts and observations...
Can we trust that what we see is what is actually seen?

Actually, is there something out there?
What do we see when we look at something?
What do we feel when we feel something.
Who feels?
What is it that is felt?
Do we actually see or feel something external to us?
Or is it all taking place in the mind?
I think that eventually by understanding this, it is possible to cut many years of working at oneself. There is the old Zen practice of sitting in front of a blank wall for twenty years...

Wim: Gotto laugh Cliff! So, twenty years of sitting in front of a blank wall cuts many years of work?!

Wim: Hardly a gain... Hey, I mean this humorously!

Wim: Huh???!!! Eventually, I mean in the end, one realizes that what one sees is only what one sensorially perceives without any mental interferences, interpretations or mental overlays, and... one FEELS what one has run into (the wall!) or what one has banged one's head against (the wall!).
Eventually one simply sees that every wall has... a gate and that every gate can serve as an exit as well as an entrance...

Cliff: Don't you get it Wim? Eventually one recognizes that even the wall is one's own mind. 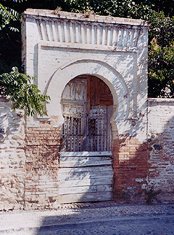 Nope, Cliff... The wall is the wall, was so and remains so, at least until its mortar ages and the wall crumbles.

And although the mind may use a wall symbolically as a projection screen, it is still a wall...
The mind perceives nothing, the senses do, the mind though can turn perceptions into conceptions which then may become mental projections.
Eventually one simply sees walls and gates of distinctions and relationships and one discovers that one can easily navigate with and through them.
So there is nothing really so deep or so mentally mysterious as what you are proposing Cliff.

The mind hopefully eventually just stills and stops, while the wall might or might not be there (no mental fabrications can make it appear or disappear) and one simply stands up and exits or enters - whatever it happens to be.

And while one suddenly smells the rose blossoms, one notices that the wall's stucco has blistered and that there are wilted rose leaves and stucco fragments on the pavement...

No need to sit for twenty years, just smell the roses...