Knowing who you are?! Why? 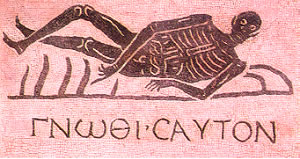 Ergo, you would not have felt the need to find out "who you are," as there would not even have been a need for that question to arise.

You would not have had to get to "know yourself" as your presence and the way you present yourself would not have been called into question in the first place.

Thus, if you feel prompted to "find out who you are," you and your way of being were at some point seriously called into question, for reasons however that had nothing to do with you, but rather for reasons that had to do with the one who expressed, deflected and/or projected their own acquired self-doubts onto you.

Rather than having to find out who you are, it might be more effective and expeditious to find out who doubted your right to exist and your way of existing in the first place.

At some point you will undoubtedly find out that that person's being and character was also at some point questioned...

You might eventually discover that this has something to do with what goes under the biblical name of "inherited" or "original sin*."

Once you fully and clearly understand the dynamics of this manipulation, the intent of which is to create subordination and subservience, you are free from any self-doubt, assumed shortcomings and artificially acquired dependencies that you at some point were made to believe to be true...

* What is important to know in this context, is that the word "sin" etymologically derives from ancient language roots meaning "debt", "shortcoming" or "falling short" and that the act of attributing "shortcomings" to someone was a tactical maneuver intended to increase the power of the one who attributed the shortcoming, over the one who was made to feel indebted or falling short.