Doubt about your existence? 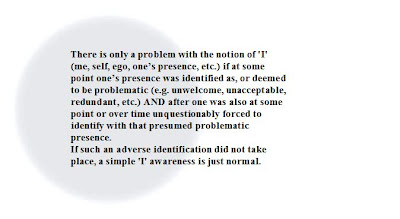 There are many ways to recover from this - to rediscover who you are.
Many paths can help you overcome this estrangement from yourself and the natural world.
But no matter which path, at some point you will get to a place where you will be confronted with the full circumstances in which you initially were made to 'lose yourself'.
Therefore it stands to reason that it could be very effective and expeditious to find out - right off the bat - who may have doubted your right to exist and your way of existing in the first place.
The problem is though that those circumstances of seeming fundamental self-loss and self-doubt tend to include strong taboos on finding out who were responsible for making you feel the way you do in the first place… The real culprits have a tendency to make themselves appear scot-free, while they at the same time charge their victims with additional sentences that tell their victims that they should resist and object to any possibility of discovering the real circumstances around their apparent loss of self. (In fact, victimizers deflect their own victimization by passing it down to others.)
One might eventually discover that this sad dynamic has something to do with what goes under the biblical name of 'inherited' or 'original sin'(2).
In any case, at some point you will undoubtedly find out that your victimizer's existence and character was at some point in his or her life also fundamentally questioned...
Once you fully and clearly understand the dynamics of this manipulation, the intent of which is to create subordination and subservience, you will be free from any self-doubt, assumed shortcomings and artificially acquired dependencies that you at some point were made to believe to be true...
Notes:
(1) Floor mosaic, Rome, Terme Museum, first century CE.
(2) The word "sin" etymologically derives from ancient language roots meaning debt, shortcoming, falling short or being without. Attributing shortcomings to someone was a tactical maneuver intended to increase the power of the one who attributed the shortcoming, over the one who was made to feel falling short or indebted.