A Quest from the Start?


The chance that we remember it ourselves might be zero, but the likelihood that we (and our ancestors and our children) came into this world in a rather shocking manner is very high – an entering into the world which differs very much from the natural process of birthing that can still be observed in the world of nature that has not yet been adulterated by domestication or other human intervention and interference.

Let's just focus for now on one aspect of what takes place around the birth of a baby and during the first months after its arrival:

the verbal and auditory input that a child receives and the possible effects of that verbal auditory input on a child's early development and even… later adulthood.

The things being said by parents, doctors, midwifes and bystanders during the birth of a child and within the following few months, often do sound well meaning and well intended. Whatever is expressed then, even if not positive, is often uttered benevolently and innocently. But it is unfortunate that most of us do not realize that any negative verbal expressions during that time can have quite a long lasting impact on a person's life… often more adverse than we might expect or suspect.

Even if it is not noticeable immediately or soon after birth, the impact can become quite evident much later in life. When I brought this up with a friend, she agreed, but she also objected a little, saying, "OK, but what for instance about my doctor who said as he was delivering my baby – this was before ultrasound – "Let me see, hmm? What have we got here? A boy or a girl, hmm?" "Is that so bad?" my friend asked me." How can, what he said possibly have much of a negative effect?"

The doctor's words were of course expressed gently, intended to relax and pleasantly surprise the mother, the still expecting parent, expecting that is, to finally hear about her child's gender.

Let's see what stands out in this little scene.

With the doctor's words it immediately became a "recorded" situation around an expressed "verbal question." At the same time his words mixed themselves into an atmosphere that was, as my friend admitted, filled with questions that were perhaps not verbally expressed, but showing up on the faces and in the actions of the parents.
These were questions and uncertainties that stemmed from their own pre-existing hopes and fears, doubts and expectations, emotional expressions that were quite possibly carry-overs from their parents' and ancestors' age-old expectations, hopes and fears about their own gender, health and future, expressed when they came into this world…
And now – again – they became carried forward onto their newly born child. An atmosphere of expectations, hope and fears, love expressed and love perhaps held back, questions and questioning, wonder and doubt, all mixed in with an environment of voices and a clattering of sounds, in a traditional clinical setting with the usual obstetric tools of the trade!

What a difference from the environment that that baby had just left: the womb where everything was unquestionably and unconditionally available, the warmth, the almost zero-gravity, the muted sounds, the womb in which the embryo did not have to behave well to be fed, where it did not have to express gratitude for receiving a healthy oxygen and nutrient carrying blood supply.
Instead, immediately at birth it got confronted with a rather harsh reality, gravitation, non-muted sounds, questioning faces, conditional expectations, a need to respond to unexpected stimuli and to have its responses judged and graded and evaluated for approval or not. Not that it is or has to be that way anymore.

Luckily nowadays the birthing environment is gentler, more human and humane. Rather than expecting responses from the child and the parents to fit or suit delivery room requirements, that environment is now more responsive to the needs of the child and its parents.
But for most of us, the way we were born, and for many who, when they are born, will still be delivered in a less welcoming environment, it stands to reason to find out what the impact is of the first questioning impressions on the natural unfolding of life from birth on.

Birth not being a disease or illness, the unquestioned need for the presence of medical operators, medications, medical interventions or interferences at birth needs to be re-evaluated.
Rather than expressing trust, the almost unquestioned medical requisites express too much doubt about the dependability of life's natural processes as well as the natural strength of the mother and the baby.
Rather than trusting, prolonging trust or creating trust, the primary dependence on medical presence and assistance underlines an unwarranted and almost unquestioned belief in the weakness of the mother, the child and the birthing process.
Expecting and delivering a baby from loving unity is still not fully realizable, birthing still contains too many expectations of complications, interventions and interferences, however well intended the interventions may be.

This is of course not to say, that there may never be valid and strong reasons for medical assistance, but it should never start out as an obligatory sine qua non!

We cannot underestimate the power of bonding to the first external impressions and stimuli while the birthing process takes place. Whatever happens goes deep and stays long.

Let's at this point investigate what that general atmosphere of questioning, hope, expectation and doubt at the beginning of pretty well everyone's life can bring about.

Could it be that such an atmosphere can easily be the breeding ground of that almost all-too-human obsession with the search for answers: the quest, finding the answer, that mysterious answer which, even when it is "found," still remains elusive or fleeting? Something like the bonding of a child to that artifice of the question, one will never find in non-human nature.

In nature, conditions are never to be looked for, never to be searched for or quested, they are evidently present, they naturally bring forth what they are set out to bring forth.
Conditions have a natural unavoidable place in life, con-ditions(1) come with it, they are the conditions or "givens" of and for life. They are as wonderfully inescapable as they are a necessary and welcome given!

In non-human nature
there is never an if-then relationship
between conditions and what they bring forth.
There is always a when-then relationship:
inescapable, unavoidable, predictable and dependable.
Nature's conditions are clear-cut and work without fail:
effect follows cause.
Conditions cannot be argued away or made to look as though they don't exist.
No mental interference will make them appear different from what they actually are.

In human nature
or actually in the de-natured human,
conditional conditions cannot be depended upon,
they might be argued away,
and they can be made to look different from what they are.

In nature directions do not go like, "... and if you see the third road on your right, turn into it!" In nature the third road on the right is seen and will be turned into, nature cannot be erratic, there is no built-in dubiousness, it cannot use excuses like, "Well, eh, sorry, I had my mind on other things, I was elsewhere."

That's how the mythologized quest for answers developed, answers that can actually not be found as "questionability" itself is naturally un-founded…

Except... except maybe for the unfortunate fact that its seeming necessity is an habituated projection of the questioning that caregivers themselves received when they were born and which they now pass on habituatedly and carelessly to their offspring, their children who instead of receiving warm welcomes, get set up to pass the same habituations on to their offspring.

To keep passing down questions regarding their baby's arrival, gender, character or quality of presence, by parents to their children, who will pass those questions down again to their children… doesn't that resemble that same "inheritedness" that so typifies the notion of biblical "original" or "inherited" sin? 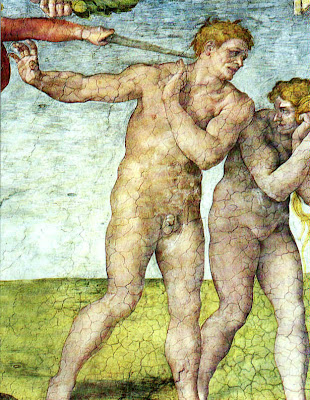