Divine essence and human existence are seamlessly 'one'

- distinguishable but not separable -
in the innermost core and essential existence of  every human being.

The Hindu notion of "paramatman" or the "supreme eternal soul" reminds me of Meister Eckhart's (c.1260-1327) understanding that  “divine essence” and “human existence” are non-dualistically and seamlessly ONE (distinguishable but not separable) in the innermost core and essential existence of every human being.

When I was 19 (after what I described in http://free-by-nature.blogspot.com/2010/10/from-becoming-to-being.html), Meister Eckhart became my spiritual inspiration together with Teresa of Avila, Hildegard of Bingen and Teilhard de Chardin.

*  Whoever possesses God in their being, has him in a divine manner, and he shines out to them in all things; for them all things taste of God and in all things it is God's image that they see.

* It is a fair trade and an equal exchange: to the extent that you depart from things, thus far, no more and no less, God enters into you with all that is his, as far as you have stripped yourself of yourself in all things. It is here that you should begin, whatever the cost, for it is here that you will find true peace, and nowhere else. (Talks of Instruction)

* In 1985 the Pope, John Paul II, said: "Did not Eckhart teach his disciples: 'All that God asks you most pressingly is to go out of yourself - and let God be God in you'? One could think that, in separating himself from creatures, the mystic leaves his brothers, humanity, behind. The same Eckhart affirms that, on the contrary, the mystic is marvelously present to them on the only level where he can truly reach them, that is in God.

* Here in time we are celebrating the eternal birth which God the Father bore and unceasingly bears in eternity, because this same birth is now born in time, in human nature. [German sermon 1, trans M.O’C. Walshe]

* The soul in which this birth is to take place must keep absolutely pure and must live in noble fashion, quite collected, and turned entirely inward: not running out through the five senses into the multiplicity of creatures, but all inturned and collected and in the purest part: there is His place; He disdains anything else. [German sermon 1, trans M.O’C. Walshe]

* Here God enters the soul with His all, not merely with a part: God enters here the ground of the soul. [German sermon 1, trans M.O’C. Walshe]

* Though it may be called a nescience, and unknowing, [Neti, neti - Wim] yet there is in it more than all knowing and understanding without it; for this unknowing lures and attracts you from all understood things, and from yourself as well. [German sermon 1, trans M.O’C. Walshe]

* The soul is scattered abroad among her powers, and dissipated in the action of each. Thus her ability to work inwardly is enfeebled, for a scattered power is imperfect. [German sermon 2, trans M.O’C. Walshe]

* Do not imagine that your reason can grow to the knowledge of God.  [German sermon 4, trans M.O’C. Walshe]

* No. Be sure of this: absolute stillness for as long as possible is best of all for you. [German sermon 4, trans M.O’C. Walshe] 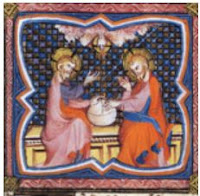 * You should know that God must act and pour Himself into the moment He finds you ready. [German sermon 4, trans M.O’C. Walshe]

* To be receptive to the highest truth, and to live therein, a man must needs be without before and after, untrammelled by all his acts or by any images he ever perceived, empty and free, receiving the divine gift in the eternal Now, and bearing it back unhindered in the light of the same with praise and thanksgiving in our Lord Jesus Christ. . [German sermon 6, trans M.O’C. Walshe]

* Since it is God's [Gotheits - Wim] nature not to be like anyone, we have to come to the state of being nothing in order to enter into the same nature that He is. . [German sermon 7, trans M.O’C. Walshe]

* So, when I am able to establish myself in nothing, and nothing in myself, uprooting and casting out what is in me, then I can pass into the naked being of God, which is the naked being of the Spirit. [German sermon 7, trans M.O’C. Walshe]

* There is a power in the soul which touches neither time nor flesh, flowing from the spirit, remaining in the spirit, altogether spiritual. . [German sermon 7, trans M.O’C. Walshe]

* One means, without which I cannot get to God, is work or activity in time, which does not interfere with eternal salvation.   'Works' are performed from without, but 'activity' is when one practises with care and understanding from  within. [German sermon 9, trans M.O’C. Walshe]

* It is a certain and necessary truth that he who resigns his will wholly to God will catch God and bind God, so that God can do nothing but what that man wills  [German sermon 10, trans M.O’C. Walshe]

* If you seek God and seek Him for your own profit and bliss, then in truth you are not seeking God. [German sermon 11, trans M.O’C. Walshe]

* We find people who like the taste of God in one way and not in another, and they want to have God only in one way of contemplation, not in another.I raise no objection, but they are quite wrong.  [German sermon 13a, trans M.O’C. Walshe]

* I declare truly that as long as anything is reflected in your mind which is not the eternal Word [] , or which looks away from the eternal Word, then, good as it may be, it is not the right thing.  [German sermon 14b, trans M.O’C. Walshe]

* For he alone is a good man who, having set at nought all created things, stands facing straight, with no side-glances, towards the eternal Word [Om], and is imaged and reflected there in righteousness.  [German sermon 14b, trans M.O’C. Walshe]

* Above thought is the intellect, which still seeks: it goes about looking, spies out here and there, picks up and drops. But above the intellect that seeks is another intellect which does not seek but stays in its pure, simple being, which is embraced in that light. .  [German sermon 19b, trans M.O’C. Walshe]

Note:
"The Life of Pi" by Yan Martel has a wonderful section on Hinduism which very much reflects the words (some exactly the same... e.g "the ground of being") and meaning of Meister Eckhart's wisdom.
On page 60, Pi refers to "Brahman nirguna" which is "God without qualities" in Meister Eckhart's words. When Pi talks about "Brahman saguna" he refers to what Meister Eckhart sees as a God with qualities, the one with human like features, e.g. the God of Abraham,  the one so often depicted as having a beard, or the one passing judgment, or the one being revengeful, or the one Moses saw on the mountain, the one who gave him the Ten Commandments.


~~~
Comment by Astrid:
Wonderful Wim, bookmarked your site last week and was delighted to see that you were influenced by Teilhard de Chardin! I just finished "The Future of Man", very weighty but moving.

Wim:
Thank you, Astrid, and yes what a great visionary sage Teilhard de Chardin was. And as you might know, just like master Eckhart, he also had to defend his views with the Roman Catholic curia and censors, but he was a bit more successful than master Eckhart, although papal cautions are still in place about his writings You may also like that I added a note to this piece about the book "The Life of Pi" by Yann Martel - a delightful read and there is really a great message interwoven into the fabric of his tales...