The Mind seen as a Field around the Brain

Wim:
Some points I was pondering aloud on a discussion forum some years ago: 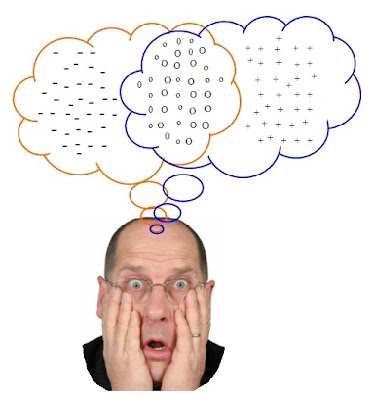 Tanya:
I have no answers for your historical, developmental questions that you just posted.
I think that thought is perceived, experienced, known. It would seem that the components of thought are reflections of what is apparently sensory perception. So thought can seem to be visual, auditory, kinaesthetic, emotional but it is all, essentially, perception.
What knows thought knows all perception.

Wim:
A good answer for my purpose, Tanya. I appreciate that you picked up on the historical developmental dynamic in my questions; also I'm noting especially that you used the word "reflections."
This somewhere ties in with my view that a 'field' is an essential part of ANY entity or thing. A field emanates from every entity or thing, be it fauna, flora, mineral, elemental, atomic or subatomic.

Every thing, every entity has a field.
I view a 'field' as an essential measurable part of ANY entity or thing.
Wave field characteristics are not a symbolic or abstract indirect representation of what they emanate from but FORM an intrinsic 'part' of and are a presentation of any entity/thing.

Example:
A sculpture that I have of my mother is not my mother, it is a replica of her put together in an entirely different medium than that what my mother in all her complexity :-) 'consists of'. Such a sculpture is a re-presentation.
A sculpture or a painting of one's mother is not 'presently' one's mother.
On the other hand I hold the view though that the mental picture that I have formed of my mother is a LIVE interconnecting concrete link with my mother; she extends into me through my mental picture of her. Vice versa of course the mental picture she has of me is also a live link to me.
This presentative relationship results from the complex dynamic of mutual reciprocal causation that is at work in Nagarjuna's view of reality as 'interdependent origination'.

Fields emanate wave-like from every entity or thing.
The characteristics of these fields - the data (Latin, literally the 'givens') are picked up by anything that is set up to register and to be 'in-formed' by these characteristics (or a selection of them) in whatever form they are emanated and registered.

There is a mutual reciprocity between the 'registrant' or 'in-formant' and the 'registree' or 'in-formee', a complex multi-dimensional simultaneity between the seer and the seen and vice versa. This dynamic was picked up by Nagarjuna as part of his very astute observations of and deliberations on causality and change that was eventually expressed as 'interdependent origination'.

This registration occurs:
Noting here that sensitivity and responsiveness are wondrously and NOT JUST SYMBOLICALLY interconnected.

I'm working on a different approach to describe the workings of the brain/mind. I have already described elsewhere how I see the human mind as a field emanating from the brain. I compared this to the idea of how the two components of the electro-magnetic field represent a 'greater something', the electrons presenting or GIVING 'its' particulate nature, the magnetic field presenting or GIVING 'its' wave nature; the particle AND wave thus being a presentation both-or-together of a 'greater something', all this similar to how particles and waves both-or-together present a 'greater something' that goes by the name of 'light'.

I suggest that 'in origin' we see the physical brain as a complex conglomerate of lipids: fatty alcohols (cholesterol) and fatty acids that originally (way long ago in human evolution and very early in the development of the embryo) started out as a tiny pool of 'lipids in solution', a solution that was set up to be especially sensitive to wavelike 'disturbances'. These disturbances or interferences created multi-dimensional complex interference patterns within this expanding three dimensional lipid solution pool that eventually dynamically stabilized itself. Along the myriad of patterned interconnected stabilization lines a precipitate got 'laid down' that eventually developed into nervous tissue. Altogether this eventually resulted in the physical structure of the brain as we have it.

(Imperial Oil just recently - I believe via Digital Media Group Ltd. and Mammoth Pictures - produced a TV commercial showing an animation of the formation of the human brain, depicting a possible first phase of the above described dynamic. DMG used 3D 'puddling' in a plasma though, rather than 3D puddling that occurs similarly in a ‘near boiling point’ liquid. I will upload the commercial if they allow it.)

We have to realize that any wave that is picked up IS an 'essential' AND 'existential' part of that what it originates from, albeit a WAVE presentation rather than a PARTICULATE one.

The brain is thus filled with non-particulate wave emanations from whatever these emanations originate from. These emanations are gathered through the senses (including the 'extra' senses and... why not) and delivered to the 'brain pool'. In the brain these wave emanations form intricate and complex multi-dimensional interference patterns which as I suggested above lead to the formation of nervous tissue which is part of the brain’s grey matter.
In addition and naturally so - as the brain is stuff - the brain also has a field. This field is 'composed of' - 'consists of' those non-particulate field emanations from whatever 'somethings' they initially originated from.

I hold the view that the brain's field, of which the combined complex formation originated from a myriad of interferential waves that emanated from 'something-elsewhere', that that IS THE HUMAN MIND in its fullest meaning and extent. The mind thus indeed consists of THAT by which it was in-formed.
I AM THAT!

One needs to be careful NOT to apply any qualitatively distinctive  notions to mind or stuff - grading the two - be it mind or body, substance or field, wave or particle. They are simultaneous concurrent expressions of a 'GREATER INTEGRAL PRESENCE'. All stuff has a field, all fields or waves are emanations from a source. Stuff and fields are simultaneous presentations of a 'greater something'.
All ‘greater somethings or presences’ make up what I like to call "The Whole Shebang."

The mind enables us thus to physically communicate - 'resonate' to say the least - with stuff, although... it 'a p p e a r s' to be 'at arm's length'. Luckily though the mind can help us happily to respond to what we sensed bodily by causing us to 'e x t e n d' our arms and embrace that what we thought we could only mentally embrace...

Michael:
Evidently we need to go beyond the apparent facts to a metaphysical view of how things must fundamentally be.

Michael:
The strong reason for this gulf between subject and object is the identification of 'I' with one side of the equation.

Wim:
Unfortunately that is the way we now tend to see this, but it only half the picture.