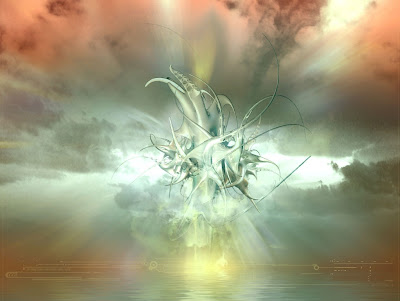 It may be hard to prove that something exists - even if it does!

This statement does not actually specifically deal with the reality of the existence of humans (e.g. our sons or daughters or ourselves): whether 'we seem to be' or 'materially are', whether our presence (and thus by extension any presence) is some illusive mentalized imagination by ??? or an existential and material unit made out of ???, created or not created by ???, by a ??? that exist or does not exist.
But, - as we cannot seem to prove anything conclusively, (see down below) statements like the above are all too often understood as to mean that therefore reality or even existence must be unsubstantial, thus only essential and not existential.

In this case the impossibility to prove anything conclusively is thus used to prove that that anything must therefore be immaterial, at best essential only, but definitely not existential... an absurd kind of proof - isn't it?!

That something cannot be proven conclusively in the above terms, can actually also mean that such a proof is redundant, that to insist on such a proof would be absurd - ridiculous actually.

To insist that a human should prove its own existence is like insisting that a hand should shake itself.

Discussions on statements like the above usually also end up in dealing with the question of whether the reality of self is physical or metaphysical, body or soul, mind or body, spirit or matter... the well known dualist distinctions...

In the end proof only convinces the ones who provide and support the proof, proof can never convince someone else conclusively.

* This obviously means that neither the dualist nor the monist view (both use absolutisms of one sort or another) is tenable... That is actually what Advaitins or Non-dualists suggest...Non-dualists actually don't mean that non-dualism means 'not two and therefore must be one'. They only say 'not two' while they insist on focusing on the awareness of who one is and what anything actually is. Thus their deliberations are always about self-evidence, awareness and consciousness.